If you are a US-based company you are most likely worried about your deliverability to the big 3 mailbox providers – Gmail, Outlook, and Yahoo. This extends to the focus of the ESP & Inbox placement monitoring providers as these are the destinations customers are focusing on since they cover nearly 90% of the market combined. iCloud, AT&T and Comcast (the small 3) get some attention too thanks to their user base even though their market shares are around 2%.

For most marketers, this is where the line is drawn but it tells only a small part of the deliverability story in Europe. Yes, ESPs will be looking into major players like BT, Web.de/GMX, Yandex, and Mail.ru but that is far from covering Europe.

So why is Europe different and why does this matter for US-based companies?

It all comes down to how Europe is shaped – many nations & many languages, political divisions during the cold war and other factors forced countries and their citizens to be as independent as possible. A strong sense of national pride is present in every European nation.

When the Internet was slowly spreading throughout Europe in the late 90s and early 2000’s it faced a major obstacle in many countries – the language barrier. For the Internet to take-off, it needed content in the local language and that meant having all the services available in the local language too. Local telecoms and entrepreneurs took up the challenge and built portals, search engines, mailbox providers, etc. for the local markets.

And people loved it! So much so, that to this day over 35% of mailboxes across Europe are operated by local providers. And that’s only an average – the range is wild – from less than 1% of local providers in Romania or Greece to the Czech Republic where local ISPs have over 85% market share!

And it’s not affecting only the marketers in Europe, but US marketers should be very much aware of this as well. As Europeans move around the world they bring a sizeable amount of mailboxes with them. Mailboxes that are below the line but may have a massive impact on a marketing campaign’s bottom line.

When we looked closely at the stats, we found that Poles love their WP, Onet & Interia mailboxes no matter if they live in Warsaw, London or Chicago. If your deliverability metrics are based on the big 3+small 3 you are very likely missing out on a significant part of your audience.

Emails sent but not delivered on time or into a spam folder are lost revenue. Even inbox providers with less than 1% share of the market can have a major impact on client’s revenues and you should always keep that in mind.

Many inbox providers in Europe impose a hard limit on the number of emails sent to their networks. In some cases, they require direct deliverability contracts for their premium deliverability services. We see this as a growing trend across Europe – monetization of the mailbox. In other cases it means building personal relationships with small providers from various countries, speaking different languages and building trust with them to get emails delivered. 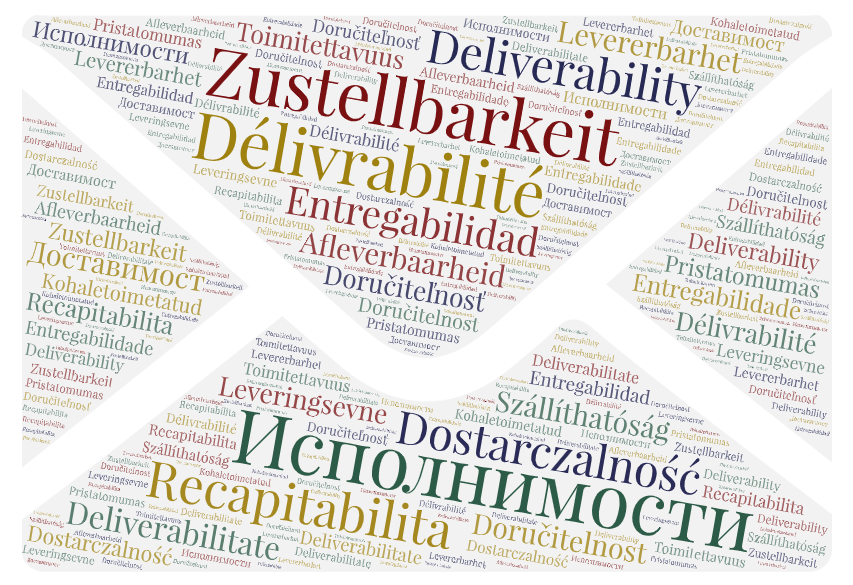 The problems don’t stop there. Once you have managed to get deliverability up with all inbox providers in Europe another problem shows up – the languages! There are 24 official languages within the EU and the number goes up when you consider non-EU states and dialects. This brings another set of problems that presents itself in spam filtering affecting all inbox providers, especially global ones.

Words in various languages may have quite a different meaning. But not only that – just the detection of the language can be complicated on its own. The big 3 have invested heavily in AI for spam detection, but it also requires large enough data samples for training. We have seen first-hand how AI mistakenly treated messages in Ukrainian or Bulgarian as misspelled Russian.

This requires a whole new approach to deliverability problems and close cooperation between email service providers and mailbox providers. Make sure your ESP, like Mailkit, has strict vetting procedures that include vetting multilingual content. You should also consider adding language headers in the emails. Mailbox providers use this data to further train their filtering systems to reduce false positives.

All of the above changes if you are not sending B2C campaigns but B2B. That’s a whole different world – Google and Outlook are getting a lot of traction with their cloud suites, but there is still a lot of other players in the arena. From Proofpoint to Mimecast, Vadesecure to Cyren, each brings their message filtering with its deliverability-related specifics. But that’s a whole new article.